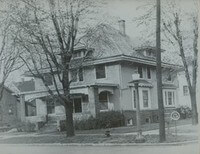 Pinnington Funeral & Cremation Services of today has roots that go back almost to the turn of the century. Although names have changed over the years, the business has provided compassionate care and quality services since 1904. The Dilgard family opened the business in 1904 and moved to it's current location in 1924. Since then, they added Lloyd Cline as a partner and changed the name to Dilgard & Cline funeral home. The Cline family then brought their son-in-law David Southern into the funeral home and changed the name to Dilgard, Cline & Southern. At Lloyd and Helena Cline's retirement in 1986, they sold the business to D. O. McComb & Sons who at the time had a funeral home in Auburn. The McComb family closed their other location and combined Dilgard, Cline & Southern with D. O. McComb & Sons to establish McComb,Dilgard & Cline Funeral Home. At that time, a 6000 square foot addition was built onto the existing funeral home which added a new chapel that can seat 250 people,lounge, selection room and garage. The McComb family had run the funeral home since 1986 and on May 1, 2009, local native, Alex Pinnington took co-ownership in the newly formed Pinnington-McComb Funeral & Cremation Services. On September 13, 2016, Alex and Nicki took full ownership and the funeral home became Pinnington Funeral & Cremation Services

A year of daily grief support

Our support in your time of need does not end after the funeral services.  Enter your email below to receive a grief support message from us each day for a year.  You can unsubscribe at any time.